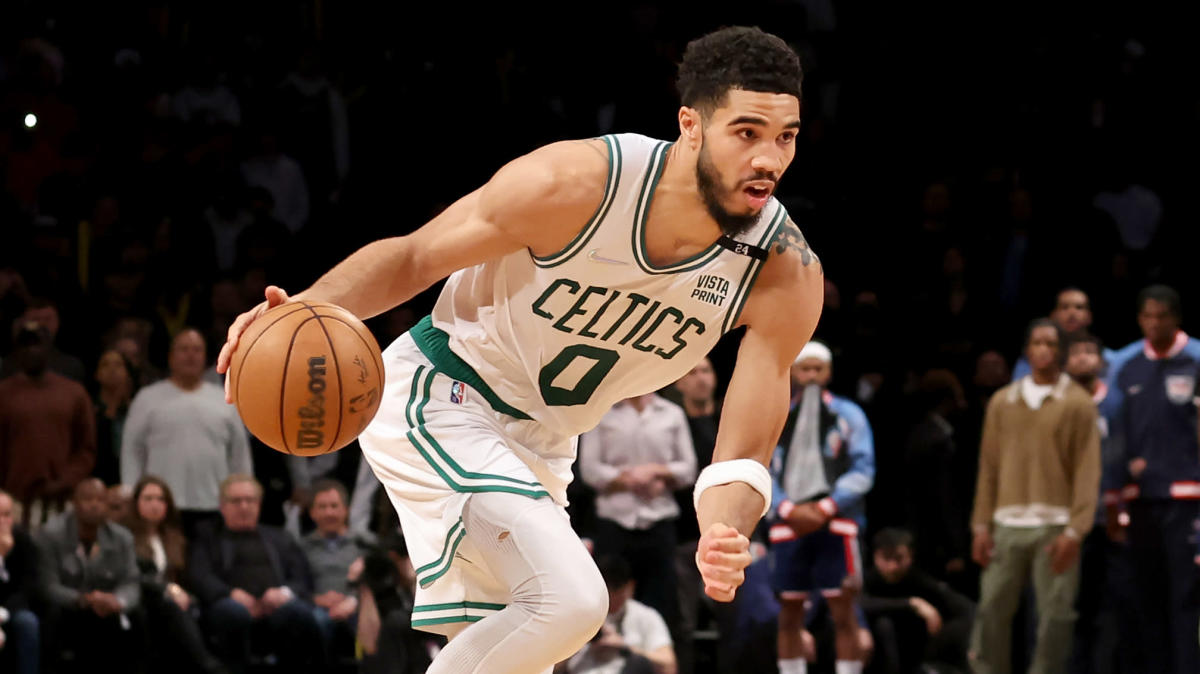 Editor’s Note: Now, all our premium tools for Fantasy, DFS and Betting are included in one subscription at one low price. Customers can subscribe to NBC Sports EDGE+ monthly ($9.99) or save 20% on an annual subscription ($95.88). And don’t forget to use promo code SAVE10 to get 10% off. Click here to learn more!

After two Game 7s on Sunday that were probably not what fans had in mind, we got a break on Monday to really think about what in the world happened. Usually series that get to seven games have a competitive Game 7, and logically so, but instead, we got the Celtics and Mavs coming out on top by an average of 30.5 points and therefore advancing to their respective Conference Finals. For the Bucks, it makes a bit of sense given they were without Khris Middleton (left MCL sprain) for the entire series, but the best regular-season team in the league just fell apart not once, but twice after blowing it in the Finals last season as well. I won’t say much more about it because we all witnessed it and it’s time to give these final four teams the attention they deserve, but Deandre Ayton’s future in Phoenix isn’t looking so hot right now. Ayton played just 17 minutes in a do-or-die game, and Suns coach Monty Williams said that the reason is “internal.” He didn’t appear to even want to be out there, and Ayton will be a restricted free agent this summer after the Suns didn’t offer him a maximum extension this past summer, so this could get quite messy. We may have just seen Ayton’s final game as a Sun, but we’ll see.

Below, I’ll preview each of the two remaining matchups, including what happened in their respective regular season series, injuries and more.

In the regular season, the Celtics won the season series against the Heat 2-1, and their wins were quite convincing. Boston held Miami to just 78 points in their first matchup back in November, winning that one by 17 points, and topped it off with a 30-point win over them at the end of January. In their most recent matchup, which was at the end of March, Miami got revenge with an eight-point win behind big scoring nights from Jimmy Butler and Kyle Lowry, but the Celtics were without Robert Williams. However, Lowry, who played in just two games in the Eastern Conference Semis against the 76ers, has already been ruled out of Game 1 on Tuesday due to his lingering left hamstring strain. In all reality, Lowry’s absence isn’t the worst thing ever for the Heat, as he scored just six points across 55 total minutes in the pair of games in which he made an appearance, and those were also the only two games of the series that the Heat lost. They looked better without him with Jimmy Butler handling the ball more, and it doesn’t really seem like Lowry is all that close, meaning Game 1 is unlikely to be the only one he’ll miss. The Heat are yet again listing all of Caleb Martin (left ankle sprain), Max Strus (right hamstring strain), P.J. Tucker (right calf strain) and Gabe Vincent (left hamstring strain) as questionable to play on Tuesday, and for basically no reason at all. Miami is still trying to understand how injury reports work, and at this point, we don’t expect them to figure it out anytime soon. To be clear, they’re all just fine and will suit up. On Boston’s side, Marcus Smart (right mid-foot sprain) is questionable, but one has to think he’ll give it a shot given what’s at stake going forward. Smart looked great in Game 7 despite some issues shooting the ball with a 11/7/10/1/1 line in 37 minutes, and he had a full day to get his injury right too. Robert Williams, who missed three straight games and received a DNP-CD in Game 7 on Sunday despite being active, will have no minutes restriction and should therefore see his usual workload in Game 1. The fact that he didn’t get into that game isn’t anything to worry about with the Celtics being so dominant on Sunday, and the extra rest can’t hurt either. Jayson Tatum (28.3 points per game) and Jimmy Butler (28.7 points per game) are neck in neck in scoring leaders for their respective teams, but Tatum has had far more help with Jaylen Brown (22.2 ppg), Marcus Smart (15.0 ppg) and Al Horford (stat-stuffing beast) all contributing consistently. The Heat’s next highest scorer this postseason has been Bam Adebayo, who isn’t even averaging 15.0 ppg, and things aren’t going to get easier for him going up against Horford and Rob Williams. On paper, it looks like the Celtics should take care of Miami and get to their 22nd Finals in the team’s history, but Miami has always been an under-the-radar pick that won’t make things easy for Boston on either side of the floor. Plus, the Suns were definitely the better team on paper in their series with the Mavs, so you can never be all too sure of anything. These two teams have also posted the second and third best defensive ratings throughout these playoffs so far (Milwaukee was first), so we can’t expect a ton of points once again.

For all the bettors, Game 1’s over/under total is currently set at 204 (via PointsBet), with the season series going 1-1-1 (one over, one under, one push) in comparison to that number. The Celtics are actually 1.5-point underdogs, likely because it’s an away game, and you can get them on the moneyline at +105 if you have some faith in them stealing a game away from TD Garden.

The App is Back! Don’t forget to download the NBC Sports EDGE app to receive real-time player news, mobile alerts and track your favorite players. Plus, now you can check out articles and player cards. Get it here!

In the regular season, Dallas went 3-1 against Golden State, but Klay Thompson didn’t play in two of the losses. Klay has struggled for a good chunk of this postseason run, but he’s looked much better lately, including turning into “Game 6 Klay” when he torched the Grizzlies for 30 points and eight triples in a series-clinching win against the Grizzlies this past Friday. Plus, this should be clear and could have been mentioned earlier, but I highly doubt these teams care all too much about what happened during the regular season. The stakes are vastly different, the atmosphere has changed, teams are more healthy overall and in this case, all of these teams statistically have a 25% chance of winning a title as of this point. The official NBA injury report for this game hasn’t been released yet, but we do know that GSW’s Otto Porter (right foot soreness) was a full participant in practice on Monday and is considered probable, so he should be ready go back to a steady role in the mid-20s with Gary Payton (left elbow fracture) still likely sidelined. Warriors coach Steve Kerr did say that he isn’t ruling out a a return for GP2 in these Conference Finals, but still thinks it’s a “longshot,” for what it’s worth. For Dallas, their portion of the injury report should be clear with the exception of Tim Hardaway Jr. (left foot surgery), but our crew will provide updates if necessary (Game 1 of this series isn’t until Wednesday, so some of these things could change, but I wouldn’t expect anything drastic). Spencer Dinwiddie, who netted 30 points in the easy Game 7 win on Sunday, has looked much better for the Mavs and I can’t believe I’m saying this, but I truly think he could be an X-factor in this series if he keeps it going. Dinwiddie failed to shoot over 40% from the field in any of Games 1 through 5, but has converted on an insane 72.7% (16-of-22) of his shots over his last two games, both of which were Mavs wins. Jalen Brunson has gotten it going again as we all expected and he’s been fantastic for them all season, and Luka Doncic simply doesn’t need analysis — he’s amazing and will continue to be. The Warriors are pretty heavy favorites for this series all in all, as illustrated by being the current favorite to win a title at +130 and the Mavs being last at +650 as I type this (Celtics are +200, Heat is +400, by the way). Still, I don’t think anyone really expected Dallas to beat out the best regular-season team in the whole league either, so I’m expecting this to be a competitive series. Obviously, the Warriors have been better and simply are better than the Suns, so the Mavs will have their work cut out for them, but Dallas’ confidence as a team must be through the roof. From a historical standpoint, the Mavs are looking to advance to the Finals for the first time since 2011, when they last won a championship by defeating the Thunder in six games. The Warriors are no strangers to this stage and this level of play, and if they do beat out the Mavs, it’ll be their sixth Finals berth in the past decade, and they’ve won three championships in those five tries.

This series probably won’t be as defensive-minded as the ECF, as the current point total for Game 1 is set at 214.5, and these four games during the season saw a 2-2 record in comparison to that number (aka they went over twice, and under twice). The Dubs are also 5-point favorites, which makes a lot of sense given they’re playing at home, and the Mavs are currently +185 to win the game outright (Warriors are -226).

– According to Sam Amick of The Athletic, the Lakers are currently asking coaching candidates how they would utilize Russell Westbrook. I can’t be the only one who would love to hear what these candidates have to say about this, and I’m no coach, but I’d be flustered. It’s going to be highly difficult for the team to trade Westbrook, and it looks like they’ve come to terms with that, so maybe he takes on a completely different role. We’re sure to hear more about this in the coming months when L.A. eventually chooses a coach and tries to bounce back from one of the most disappointing seasons in history.

– Alvin Gentry rejoined the Kings as their Vice President of Basketball Engagement, as reported by Shams Charania on Monday. Gentry was Sacramento’s interim head coach to cap off another miserable season, and now that they have their new coach in Mike Brown, Gentry will be behind the scenes for next season and possibly beyond.

KD is leaving a mess he helped create