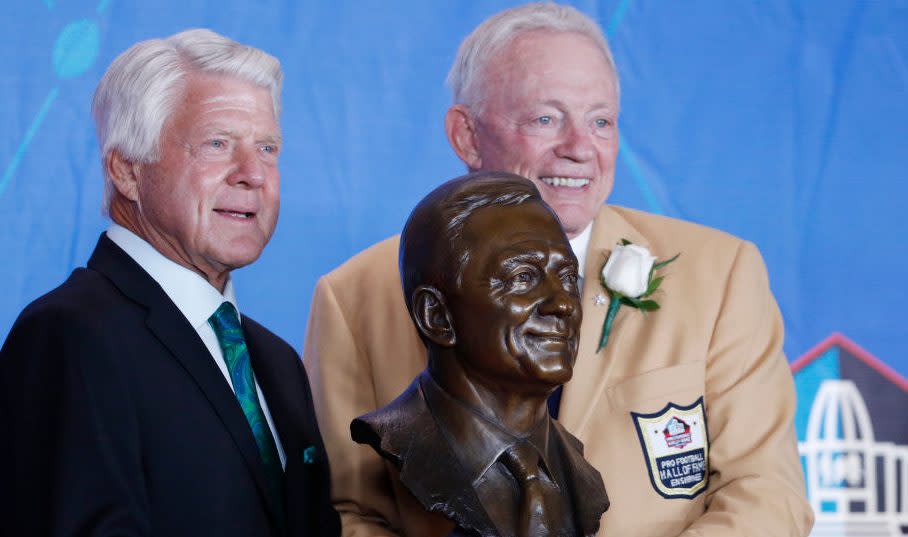 Their family feud apparently isn’t dead almost 30 years after an acrimonious split in the 1994 offseason.

During an interview with Jones on Sunday, Newy Scruggs of NBCDFW told Jones it seemed “very petty” for Johnson not yet to have his name on the facade at AT&T Stadium.

“It’s BS for anybody to be making anything (of that),” Jones said. “I’ve said I’m going to put him in. Now, when I put him in, and the circumstances and what I do with that, there’s a lot more than Jimmy to think about here, and I’ve got a lot of other lives out here that have laid a lot on the line on the field that need to be in that Ring of Honor as well. And so how I do that, what I do it with, I get to make that decision, and it isn’t at the end of the day all tailored around whether Jimmy is sniveling or not.”

Johnson, 79, responded on the Dan Le Batard Show on Thursday.

“I had to look that word up in the dictionary. I don’t know that I’ve ever sniveled,” Johnson deadpanned. “Do you ever remember me sniveling?”

Jones and Johnson are the only two Pro Football Hall of Famers who spent most of their careers with the Cowboys who are not in the team’s Ring of Honor. Jones went into the Pro Football of Fame in 2017, and Johnson earned a spot in Canton in 2020.

Jones makes up the one-man committee that controls the inductees into the team’s Ring of Honor.