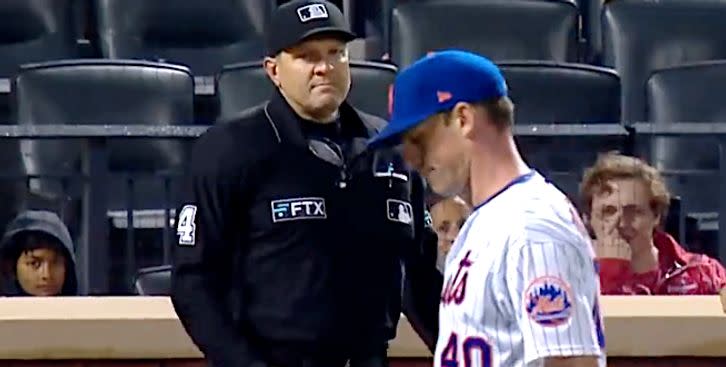 Umpire Chad Fairchild seemingly missed a strike-three call during the Mets–Braves game in New York on Monday, but he didn’t miss the chance for an unusual exchange with the player who threw the pitch. (Watch the video below.)

Mets pitcher Chris Bassitt fired what appeared to be a third strike past Atlanta’s Dansby Swanson in the fifth inning with the Mets ahead, 2-1. Fairchild, however, called it a ball. The SNY broadcast team said Fairchild “clearly missed” making the correct call.

Fairchild apparently agreed. As Bassitt walked off the mound without allowing a run in the inning despite walking Swanson, Fairchild pointed at the pitcher and tapped his belly in a “my bad” gesture.

“Not sure I’ve ever seen an umpire actually apologize for a blown call while on the field,” one Twitter user wrote.

Bassitt said afterward that he also apologized to Fairchild for showing him up by heading toward the dugout after the call.

Chris Bassitt said he also apologized to umpire Chad Fairchild for «showing him up» by walking off the mound on the missed third strike call on Dansby Swanson:

«I ain’t gonna be mad at no umpire, I can tell you that» pic.twitter.com/W8N7EEmodp

While the umpire’s open admission was unexpected, the “exchange of mea culpas” between player and ump was rare, ESPN noted.

Bassitt surrendered two runs in the inning that followed and was the losing pitcher in a 5-2 defeat.

This article originally appeared on HuffPost and has been updated.