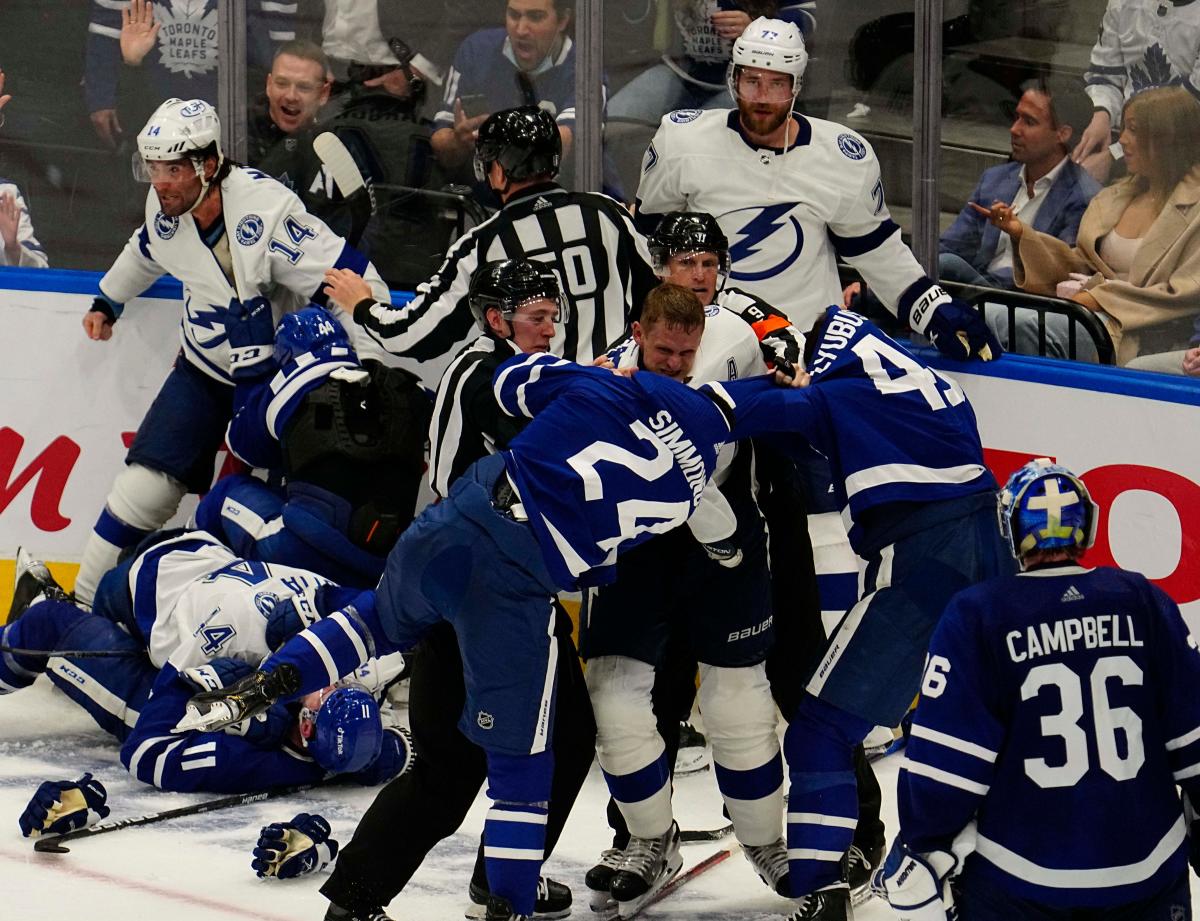 An ugly performance by the two-time defending champion Tampa Bay Lightning led to an ugly brawl in a 5-0 loss to the Toronto Maple Leafs on Monday on the opening night of the Stanley Cup playoffs.

With the game out of hard midway through the third period, Tampa Bay’s Corey Perry tried going after Toronto’s Wayne Simmonds. Nothing happened there, but Perry and Ilya Lyubushkin went at each other.

While ESPN2 cut away for a commercial, Simmonds shoved Lightning star Victor Hedman and fights broke out, including Perry and Lyubushkin throwing punches and Toronto’s Morgan Rielly punching Tampa Bay’s Jan Rutta. Rutta left the ice with a big cut on his face.

SPORTS NEWSLETTER: Sign up to get daily updates sent to your inbox

PLAYOFFS: One key question for each postseason team

«I thought we handled their physicality well,» Maple Leafs coach Sheldon Keefe told reporters, «both in making plays and keeping the puck moving and not getting rattled by it, and then just standing our ground when the nonsense starts late in the third.»

Perry ended up with 23 penalties in the game. Rutta had 17 and teammate Pat Maroon had 10. Lyubushkin had 16 minutes for the game, Simmonds 10 and Rielly 15.

Toronto’s Kyle Clifford also had 15 minutes, but that was because he was ejected for a boarding major against Ross Colton that could draw the interest of NHL Player Safety.

What should have been a golden opportunity for the Lightning ended up setting the tone for the Maple Leafs.

Toronto shut down that five-minute power play and other ones as the Lightning made numerous giveaways against an aggressive penalty kill.

«They did a good job of executing early on those PKs and gained some momentum and it could have been a really different game if we had scored early on that,» Lightning captain Steven Stamkos told reporters. «It was a missed opportunity for us.»

The Maple Leafs, meanwhile, got a 5-on-3 power play goal from 60-goal scorer Auston Matthews (Keefe had called a timeout to rest the first unit) and a short-handed goal from David Kampf.

Game 2 is Wednesday night in Toronto.

«The Tampa Bay Lightning will be a far better team when they come back in here,» Keefe said. «And we’re going to have to be better ourselves.»

Toronto’s Matthews and Mitch Marner had one goal between them in last season’s first-round loss to the Montreal Canadiens.

Marner said it was «great» to score, but he wasn’t letting the drought bother him.

NHL Player Safety could have a busy Tuesday. ESPN reports that the department is reviewing this cross-check by Minnesota Wild defenseman Jared Spurgeon on the ankles of St. Louis Blues forward Pavel Buchnevich.

The Blues won 4-0 in Game 1 on a David Perron hat trick and a 37-save shutout by Ville Husso.