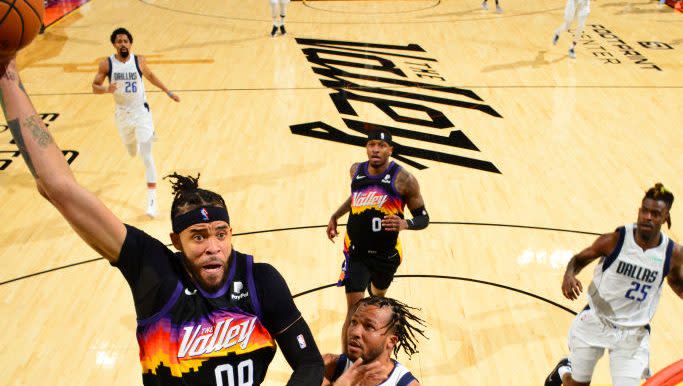 And McGee wasn’t even the Suns center who lived up to his fearsome billing.

Deandre Ayton scored 25 points to lead Phoenix to a 121-114 home win over the Mavericks in Game 1 of their second-round series Monday. But it was his backup, McGee, who left the deepest impressions – both physically and psychologically – entering Game 2 Wednesday.

First, McGee bumped Doncic hard while jostling for rebounding position. Doncic, who missed the start of the playoffs with a left calf strain, really favored his left hip afterward:

Then, McGee – as Doncic attempted to cross him over in isolation – picked Doncic’s pocket and took the ball the other way himself for a dunk:

But the game’s intensity dropped considerably by then. In a victory fitting of a heavy championship favorite, the Suns never trailed and led by 21 in the fourth quarter. Ayton scored all 25 of his points in competitive portions of the game.

Devin Booker (23 points, nine rebounds eight assists) was instrumental in Phoenix building its big lead. Though not at his best (7-for-20, including 1-for-5 on 3-pointers), he looked sharper as he gains distance from his strained hamstring.

The Mavericks started Dwight Powell to match up with Ayton, but that proved futile. Dallas kept close by going small and bombing 3s in small-ball lineups with Maxi Kleber (19 points on 5-of-8 3-point shooting) at center. Especially for such a good offense, Phoenix is relatively 2-point centric. That allows the Mavericks to work the 3>2 math in their favor. Between Doncic’s singular excellence and a spread floor, Dallas can put up points – even against an impressive Phoenix defense.

But once the Suns – led by Cameron Johnson (17 points on 3-of-6 3-point shooting) – started hunting from beyond the arc themselves, they pushed their lead even higher. Chris Paul (19 points, though just three assists) hit a couple shots late to keep the Mavericks at bay.

The star of Dallas’ first-round win over the Jazz, Jalen Brunson (13 points on 6-of-16 shooting) found much stiffer perimeter defense in Phoenix. Somewhere, Rudy Gobert is agitated (and maybe plotting to do something about it).

The Mavericks had the best player on the floor in Doncic. But Phoenix was far more complete, offensively and defensively. The Suns certainly hope this was a tone setter for the series.

More on the Suns

Rockets improving by becoming one of NBA’s best rebounding teams

Joel Embiid returns for Sixers vs. Hawks after missing 4 games with injury

Celtics’ Jaylen Brown ruled out for Monday vs. Hornets