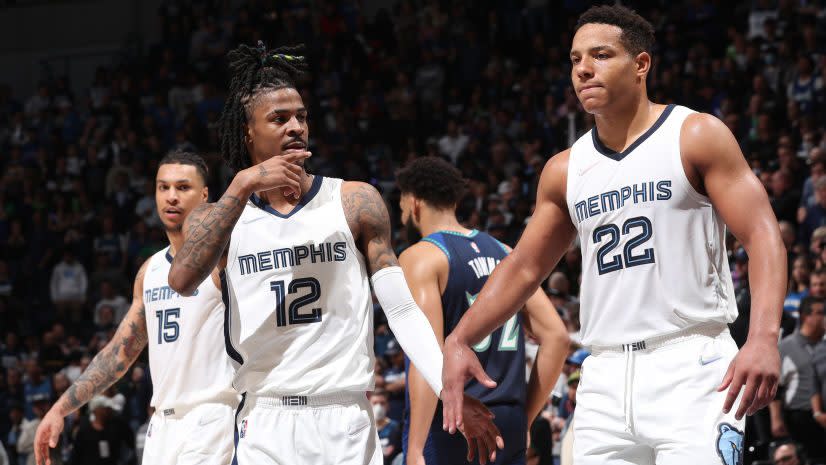 Three times in this series the Minnesota Timberwolves had a double-digit lead in the fourth quarter and watched it evaporate in the face of a relentlessly attacking Grizzlies offense.

The third time was in Game 6. Minnesota entered the final quarter up by 10, and they had held Ja Morant to just 11 points. Still, there was a nervous energy in the Target Center — the Timberwolves fans had seen this movie before. Memphis never relents. The Grizzlies shot 6-of-12 from 3 in the fourth quarter, opportunities set up by the ability of Morant — 11 assists on the night — and others to get into the paint and kick out to shooters.

The depth of the Grizzlies showed — they got 23 points each from Desmond Bane and Dillon Brooks, along with some key free throws late by Morant — and that was enough to beat the Timberwolves 114-106. Memphis takes the series 4-2.

“It was ugly but we battled through, battled back, got the win,” Morant said during his televised walk-off interview. “But we’ve gotta be better next round. We can’t come out playing how we did in this series right here.”

Memphis will fly to the Bay Area to take on Golden State in the second round, starting Sunday. The Grizzlies return to the second round of the playoffs for the first time since the “grit n’ grind” era.

The Grizzlies were the more athletic but also more balanced team in the end — Bane ended up being a player the Timberwolves struggled to stop all series. That depth proved to be the difference.

The Timberwolves — who took a huge step forward this season by returning to relevance and the playoffs for only the second time in 18 years — see a promising season end.

Minnesota got off to a strong start in Game 6 as Anthony Edwards scored 16 of his 30 points in the first quarter. Karl-Anthony Towns added 18 points and 10 rebounds on the night, while Jaden McDaniels also was hot early and went on to a career-high 24 points, knocking down 5-of-6 from 3.

But as it has all series, the young Minnestoa team kept shooting itself in the foot with stupid mistakes, letting the Grizzlies hang around. A frustrated KAT launched a couple of ill-advised shots in the fourth quarter, which gave the ball back to Memphis.

Still, this season and a playoff run gave the Timberwolves something to build upon.

For the Grizzlies, the future is now. They will be heavy underdogs to a Warriors team with far more playoff experience, but in a playoff series about matchups Memphis brings a lot more athleticism, which Golden State could struggle to stop at times. This will not be a stroll through the park for the Warriors.

Here’s more on the Grizzlies

Grizzlies come from double-digits down in fourth — again — to eliminate Timberwolves in 6 originally appeared on NBCSports.com

KD is leaving a mess he helped create