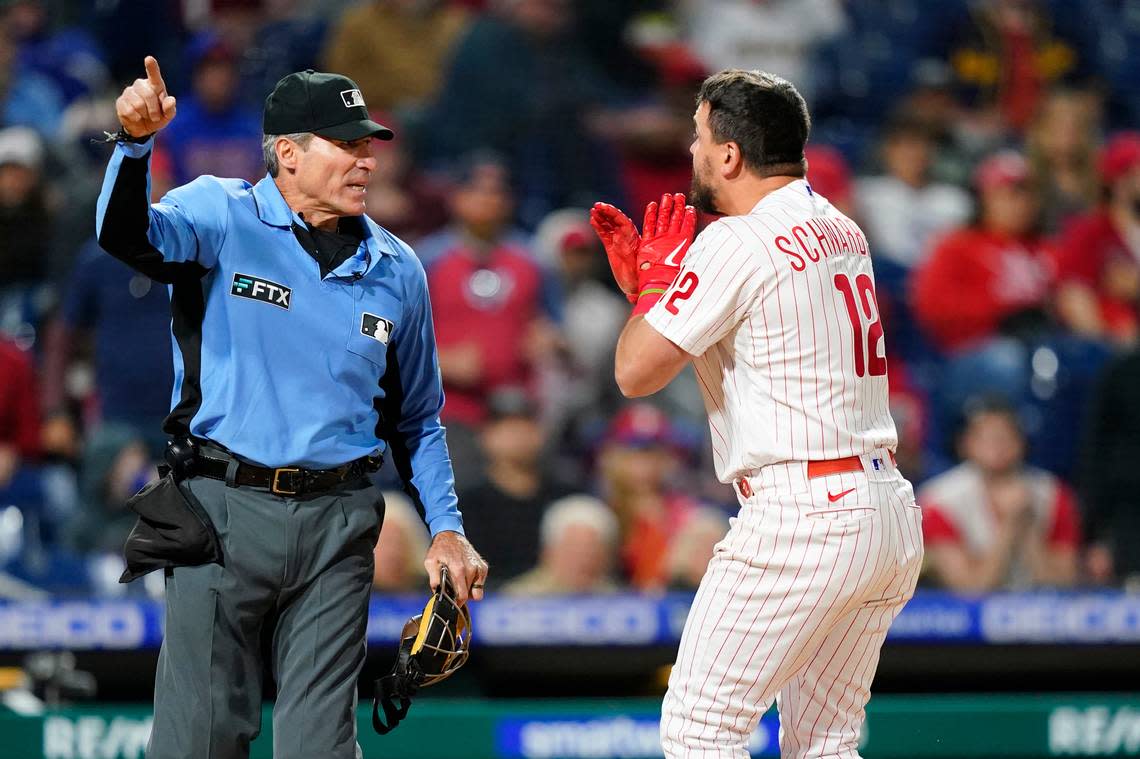 There wasn’t a whole lot of action in the “Sunday Night Baseball” game on ESPN, as the Brewers won 1-0 at Philadelphia.

That is, until the bottom of the ninth inning.

With one out, Phillies left fielder Kyle Schwarber was called out on strikes on a 3-2 pitch. The pitch was actually outside, but umpire Ángel Hernández rung up Schwarber, who spiked his bat and helmet, and went on a brief but epic tirade.

Hernández tossed Schwarber immediately, as one would expect. After the game, Schwarber spoke with the media about Hernández and the call.

Schwarber also declined to reveal what he told Hernández: “That can stay between me and him.”

Hernández’s name was once again trending on Twitter for his missed calls, and he was the lowest-rated home-plate umpire in Sunday’s MLB games, per Umpire Auditor.

Umpire Angel Hernandez was the lowest rated umpire on the day, missing 19 calls for a correct percentage of 85.3%.

He rang up 6 batters on pitches that were outside the zone and called a strike to Jean Segura that missed inside by a season high 6.47 inches.#Brewers #Phillies pic.twitter.com/pmmt1ELJJ6

Schwarber told the Athletic he was making a stand for other players.

“I think guys let him know,” Schwarber said. “We thought they were off the plate. There just wasn’t an adjustment made. I guess that comes back to us. When that’s happening, we have to make an adjustment. But it’s tough when balls in really big spots get called strikes.”

MLB.com noted six batters struck out looking in the game (four Phillies and two Brewers) and Statcast showed that none of those third strikes were in the zone.

“I’m all for umpires. I’m not against them. I’m pro-umpire,” Schwarber told MLB.com. “I don’t want the electronic strike zone. I like the element of sometimes pitches don’t get called. Guys don’t receive it well or whatever it is. It’s an enjoyable part of the game. But when you have things that are getting called off the plate with really good pitching on their side, it can be harder to score. You saw on both sides that it was a harder game to score.”