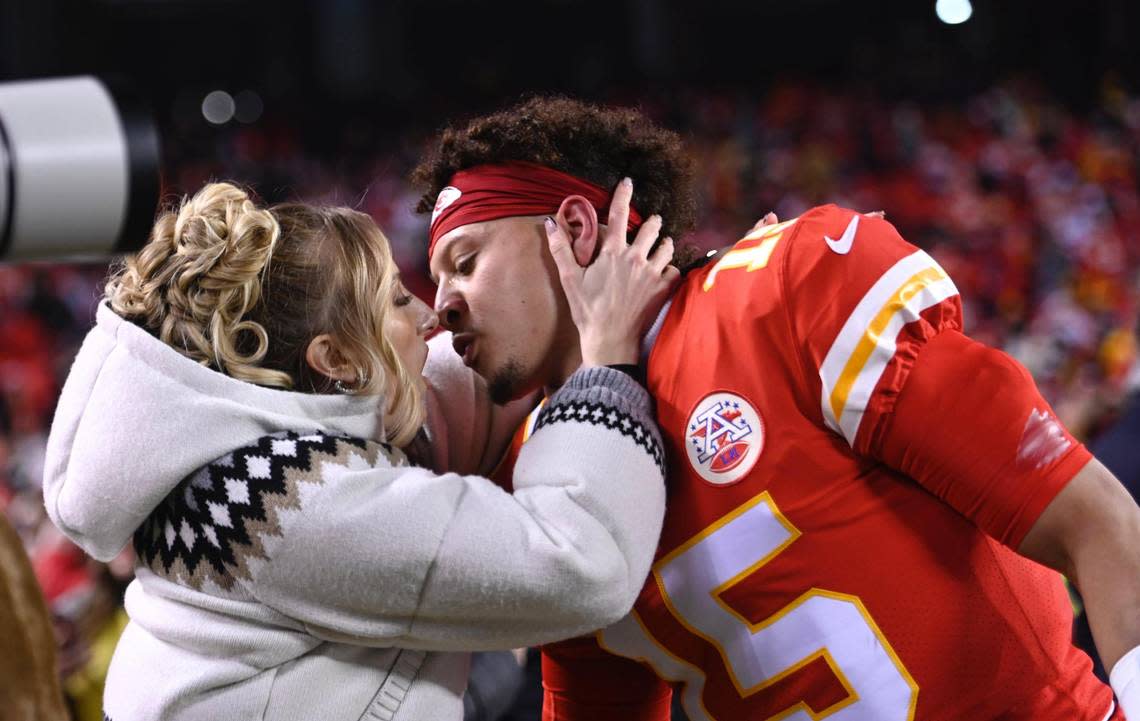 Brittany Matthews joyously popped open a bottle of champagne inside Arrowhead Stadium to celebrate the Chiefs’ thrilling victory over the Buffalo Bills on Sunday night.

Her celebration, though, turned into a social media hangover as video of her big splash went viral, people slammed her, and other public figures rushed to her defense.

As the stadium exploded into celebration, she popped the cork from a bottle of bubbly and sprayed fans screaming and cheering below her suite seat.

New York-based blog Barstool Sports tweeted a video clip of the moment that appeared to have been posted by the quarterback’s brother, Jackson Mahomes. Matthews posted a video on her Instagram, too.

The website, known for taking jabs at Matthews and Jackson Mahomes, incited a flood of public criticism with a story calling the two of them names and by tweeting: “For societies (sic) sake the Bengals need to win next week.”

The Chiefs will take on the Cincinnati Bengals in the AFC Championship Game next Sunday at Arrowhead.

After a day of derision, Matthews tweeted Monday night: “I just wish I could do what I want without getting attacked every week.”

Rachel Vindman saw her plea and tweeted encouragement — as did many Chiefs fans.

Vindman is married to retired U.S. Army Lt. Col. Alexander Vindman, who testified about Donald Trump’s call to the president of Ukraine during the 2019 impeachment hearings.

She has spoken out about her own family being attacked after her whistleblower husband’s testimony.

“Do what you want whether you get attacked or not. Trust me on this one,” Vindman tweeted at Matthews.

Do what you want whether you get attacked or not. Trust me on this one.

Former Missouri Secretary of State Jason Kander also rallied to Matthews’ aid and scolded people taking potshots at a woman who has adopted Kansas City as her home.

“She’s raising a family with her high school sweetheart in a town she and her husband have embraced and invested in. She supports her partner. She celebrates with her fellow Kansas Citians.

“She is a part of our community. If you don’t like @brittanylynne8, that’s about you,” tweeted Kander, who is now president of the Veterans Community Project, a Kansas City-based nonprofit that builds houses for homeless veterans.

Matthews tweeted back: “I appreciate this. So true!”

She’s raising a family with her high school sweetheart in a town she and her husband have embraced and invested in. She supports her partner. She celebrates with her fellow Kansas Citians. She is a part of our community.

If you don’t like @brittanylynne8, that’s about you. https://t.co/gYcXsBx5Tm

Somehow, the incident turned into a two-day bender. Twitter users whose profiles identified them as New England Patriots fans fueled some of the flak.

On Tuesday, a dry cleaner in Martin City, in south Kansas City, offered on Twitter to clean any item that “had any champagne from Brittany’s celebrating the @Chiefs epic win over Buffalo.” Just present your game ticket and ask for Joe.

Still feeling the heat Tuesday afternoon, Matthews tweeted at the Twitter masses: “Hate is a very strong word to just be thrown at someone you don’t even know.”

She and Mahomes have been a couple since high school in Tyler, Texas. They have a daughter, Sterling. They have not publicly announced a wedding date but Mahomes has said it will be at the beginning of the offseason. There’s speculation it could be as early as March.