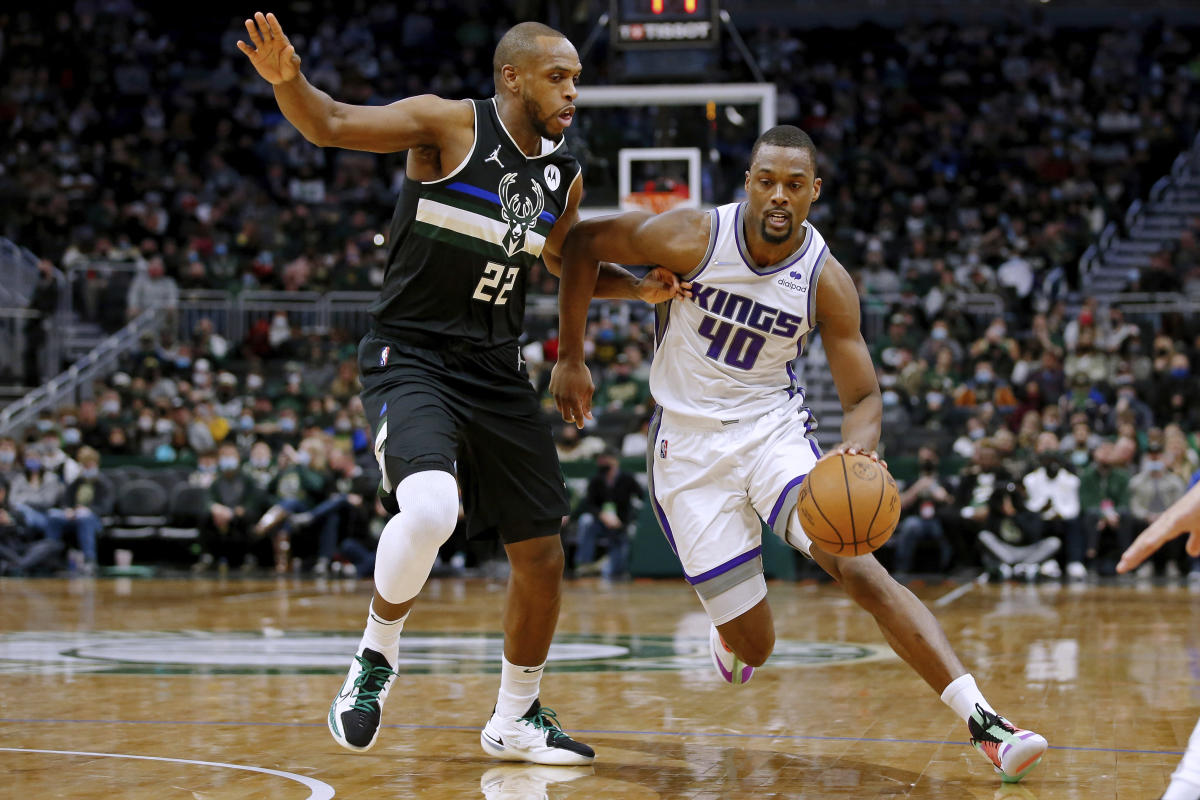 MILWAUKEE (AP) One night after overcoming a defensive struggle to beat the Chicago Bulls, the Milwaukee Bucks unleashed their offense on the Sacramento Kings.

The end result was the same, with the Bucks claiming a 133-127 victory Saturday night behind the play of veterans Khris Middleton and Jrue Holiday. Middleton finished with a game-high 34 points and Holiday added 26 as the Bucks won without Giannis Antetokounmpo, who sat out with right knee soreness.

Middleton sank a clutch 3-pointer with 1:09 left after the Kings (18-30), who trailed by as many as 15 points, rallied within three points. After Harrison Barnes converted a layup for the Kings, Holiday split the defense and threw down a left-handed dunk to give the Bucks a 126-120 lead with 47.6 seconds remaining.

Holiday pointed to Middleton’s key triple as keeping the Bucks in control of the game.

»I feel like this is what he has been doing,» Holiday said. »He makes timely threes. He makes big shots, especially in that moment when they had momentum. He just came down and laced them, took advantage.»

Donte DiVincenzo added 20 points while George Hill had 17 and Pat Connaughton 15 for Milwaukee. The Bucks made 21 of 42 3-point attempts one night after shooting 19.4% from behind the arc.

Hill and Connaughton both were in the starting lineup and made big contributions. Hill was 3 for 6 from 3-point range and made all six of his free throws. Connaughton went 5 for 10 from beyond the arc, taking all of his shots from 3-point distance.

»I think they were great,» Middleton said. »Pat got hot for us. George did a great job at the point guard position, just controlling the team. Defensively he was all over the place, coming down for rebounds and helping box out. Pat has played so many different positions. It’s weird to see him playing the center. He’s a selfless guy doing anything that can help.»

Sacramento led by 12 points late in the first quarter but Milwaukee outscored the Kings, 35-19, in the second quarter.

Kings: Haliburton was honored at a ceremony in his hometown of Oshkosh on Friday. The Kings guard had his No. 14 jersey retired at Oshkosh North High School and was inducted into the school’s athletic hall of fame. Sacramento interim coach Alvin Gentry attended the ceremony. . Team leading scorer D’Aaron Fox (21-point average) was out with a left ankle injury. . Davis scored 35 points in the Kings’ 133-131 loss to Detroit on Wednesday. »He’s getting consistent minutes now and it’s showing in his play,» Gentry said.

Bucks: Antetokounmpo (right knee soreness) and Grayson Allen (left hip soreness) sat out with injuries. . Allen was ejected from the Bucks’ 94-90 win over Chicago on Friday after committing a Flagrant 2 foul on the Bulls’ Alex Caruso, who broke his right wrist on the play. Caruso is expected to be out six to eight weeks. »Competition is tough and there are things that happen in the games that are unfortunate,» Budenholzer said. »I know Caruso is going to miss some time and I feel for him. I don’t want that for any of our opponents, for anybody. But there was nothing done that was intentional. Grayson has been nothing but great for us.» … Bucks guard Wes Matthews suffered a bruised knee late in the third quarter and had to leave the game.

Kings: Play at Boston on Tuesday. Sacramento swept the two-game series against the Celtics last season.

Bucks: Play at Cleveland on Wednesday. Milwaukee has split two games with the Cavaliers this season (both at home).