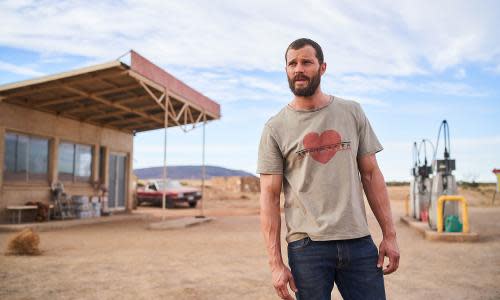 After an … interesting few years on the big screen, appearing in the Fifty Shades of Grey franchise (as the suavely sadistic protagonist – a performance slightly undermined by the actor’s clear desire to climb out of his own skin to get away from it all) and Wild Mountain Thyme (as – well, you wouldn’t believe me if I told you, but do look it up once you’re in your cups), Jamie Dornan is back on the small screen that gave him his breakthrough. Back then, he was compelling as the still, quiet, psychopathic serial killer Paul Spector in The Fall. Now he is equally compelling in a more action-packed role as a character known only as The Man in the new BBC One thriller The Tourist. It is the latest offering from the acclaimed writers of The Missing, Baptiste and Liar, Harry and Jack Williams, and – from the first of the six episodes, the only available for review – it looks set fair to measure up to their past successes.

We meet The Man travelling apparently without a care in the world across the Australian outback, until a Duel-ish truck appears behind him and starts trying to push him off the road. This is greeted by The Man less with shock than resignation – our first sign that The Man may not be quite the everyman he seems. He escapes by driving through a stand of trees but his relief is shortlived. The truck cannons into him from the side and he wakes up in hospital with no memory of who he is, how he got there or what his life was like before. Probationary officer Helen Chambers (Danielle Macdonald) is in charge of the case. You would be looking at her a long time before you were reminded of someone who ought to be responsible for an amnesiac man while investigating an unexplained car accident. Her main contribution so far is to let him go to a lunch appointment – according to the details written on a scrap of paper he finds in the clothes he was wearing when the accident occurred – at a diner 30 miles away on his own (and on crutches). The waitress, Luci (Shalom Brune-Franklin), spills lemonade on him. She is helping him to the loos outside when the diner explodes. They look back as smoke and debris fill the air. “Either I have the worst luck in the world,” says The Man, “or someone’s trying to kill me.” “To be fair,” replies Luci judiciously, “I think having someone trying to kill you would be the worst luck in the world.” In the aftermath, as the police tape up the site, they get a beer. “Fuck me, that’s lovely,” says The Man. “I hope I didn’t used to be an alcoholic.” The hour is peppered with humorous, humane moments like this, that keep an otherwise preposterous premise from exploding into smoke and debris itself.

The thick continues to plotten with the addition of scenes of a man buried alive somewhere in the outback (not gratuitously choking and awful, but no fun to watch if you’ve a scintilla of claustrophobia in you) with a ringing phone just out of reach, and a disposable camera is discovered at The Man’s crash site with photos of local landmarks, which puts him on the trail of his forgotten self. CCTV shows him buying a T-shirt and stuffed koala at a roadside shack. The shopkeeper told him how to get to the nearest garage and there is the koala – stuffed behind a bin along with a mobile phone. The final scene is him answering its ring. Guess who it is?

I’m not going to tell you because it’s well worth watching this fun, stylish and confident caper, which clearly still has numerous twists up its sleeve and characters to play with. The growing friendship between The Man and Helen – and the toxicity of her marriage currently being sketched in – promises to give the drama heart, too. Dornan is on fine form (and everyone who had begun to worry that they had hallucinated his acting ability in The Fall can sigh with relief and pat themselves on the back at the same time) and five more hours of this Memento-lite production should slip down as easily as The Man’s post-bomb beer. Lovely.