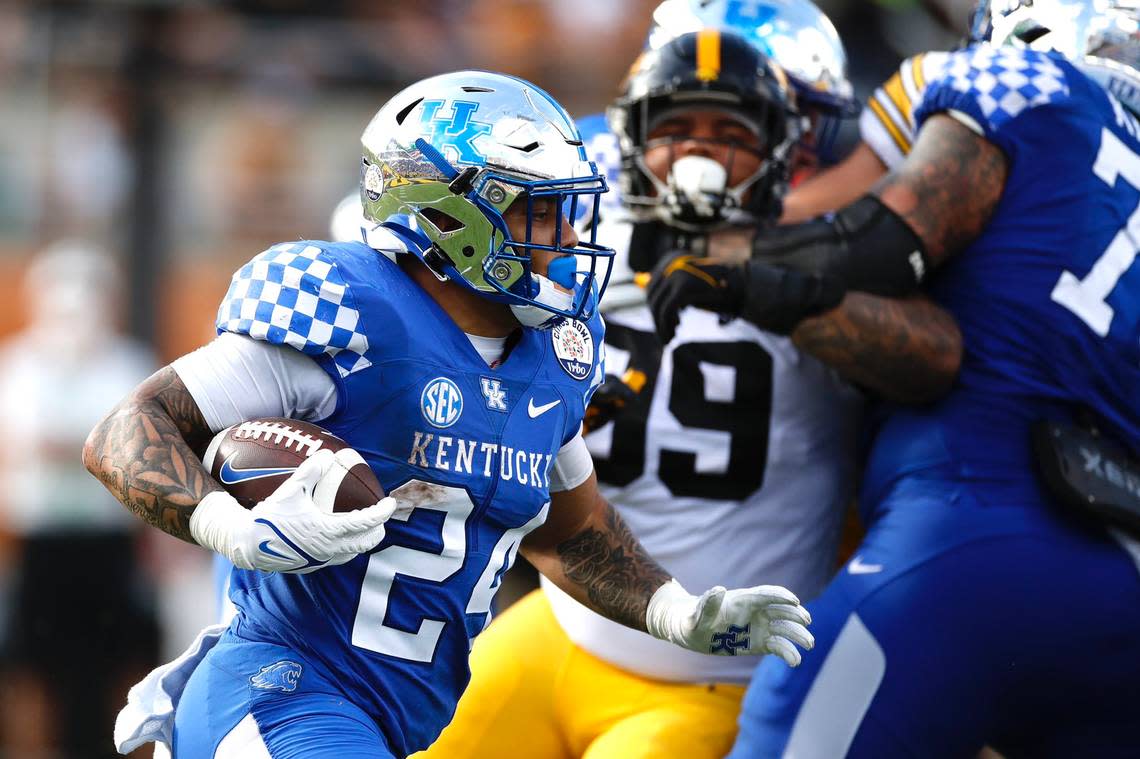 1. Wan’Dale Robinson becomes a bona fide Kentucky football legend. After two lost years being used as a running back at Nebraska, the former Western Hills High School star transferred home to UK looking for a chance to show he was an NFL-caliber wide receiver.

On Saturday in a New Year’s Day bowl, Robinson showed he is as good a wideout as Kentucky has ever had.

With the UK roster depleted by unexpected attrition (see below), UK was down 17-13 when it got the ball back at its own 20-yard line with 3:31 left in the game.

Needing to go 80 yards, UK QB Will Levis got the drive started with a 7-yard pass to Robinson on an out.

After an Iowa sack erased all of that gain, Levis hit Robinson on a deep slant for 17 yards.

UK had it second-and-10 at the 37, when Levis found Robinson again for 10 yards.

Kentucky was facing second-and-10 at its 47, when Levis found Robinson with a short pass.

The former Cornhusker — who never got to play in a bowl while spending his freezing winters in Lincoln — bobbed and weaved, cut back and took the ball all the way to the Iowa 1-yard line.

“I needed to make a play for my team,” Robinson said afterward. “I got the ball in my hands and just did what I could to get it down there.”

After a UK illegal procedure penalty, Christopher Rodrigeuz broke a tackle in the UK backfield and rolled around left end for a 6-yard touchdown run.

A DeAndre Square interception made it stand.

He was the very worthy Citrus Bowl MVP.

Paschal left UK’s season-ending victory over archrival Louisville with a “lower-body injury.” Ali and Epps suffered injuries in an auto accident after the regular season.

A UK football publicist said the other sidelined players were kept off the field by a combination of COVID-19 testing issues and contact tracing.

Yet with so many key players out, Kentucky had enough depth of talent in its program and found the will to win against a 10-win Iowa team that won the Big Ten West.

UK has not lost to a non-SEC foe since falling 24-23 to Northwestern of the Big Ten in the 2017 Music City Bowl.

Iowa had not lost to a non-Big Ten foe since falling 30-3 to Florida of the SEC in the Outback Bowl that followed the 2016 season.

Robinson’s 10 catches pushed the single-season UK receptions record he had already set to 104 catches. His 170 yards receiving gave him 1,334 for the season. That moved him past Craig Yeast (1,311 in 1998) for the UK season record in that category, too.

Rodriguez, a redshirt junior, has yet to declare his intentions regarding the 2022 NFL Draft. If he were to return to UK next season, he would need 1,134 rushing yards to pass Benny Snell (3,873) as Kentucky’s all-time leading rusher.

Kentucky will be playing to tie Stoops with the iconic Paul “Bear” Bryant, 60-23-5 as Wildcats head man (1946-53), as UK’s all-time winningest football coach.

In its entire football history, UK has now had four seasons with at least 10 wins — and Stoops has produced two of them.

The UK program will enter the 2022 season with an all-time mark of 639-635-44. This will be the first offseason into which the Kentucky program will carry an all-time winning record since 2011-12.

Since the start of the 2015 season, UK is now 6-1 when it wears silver chrome helmets over all-blue uniforms.