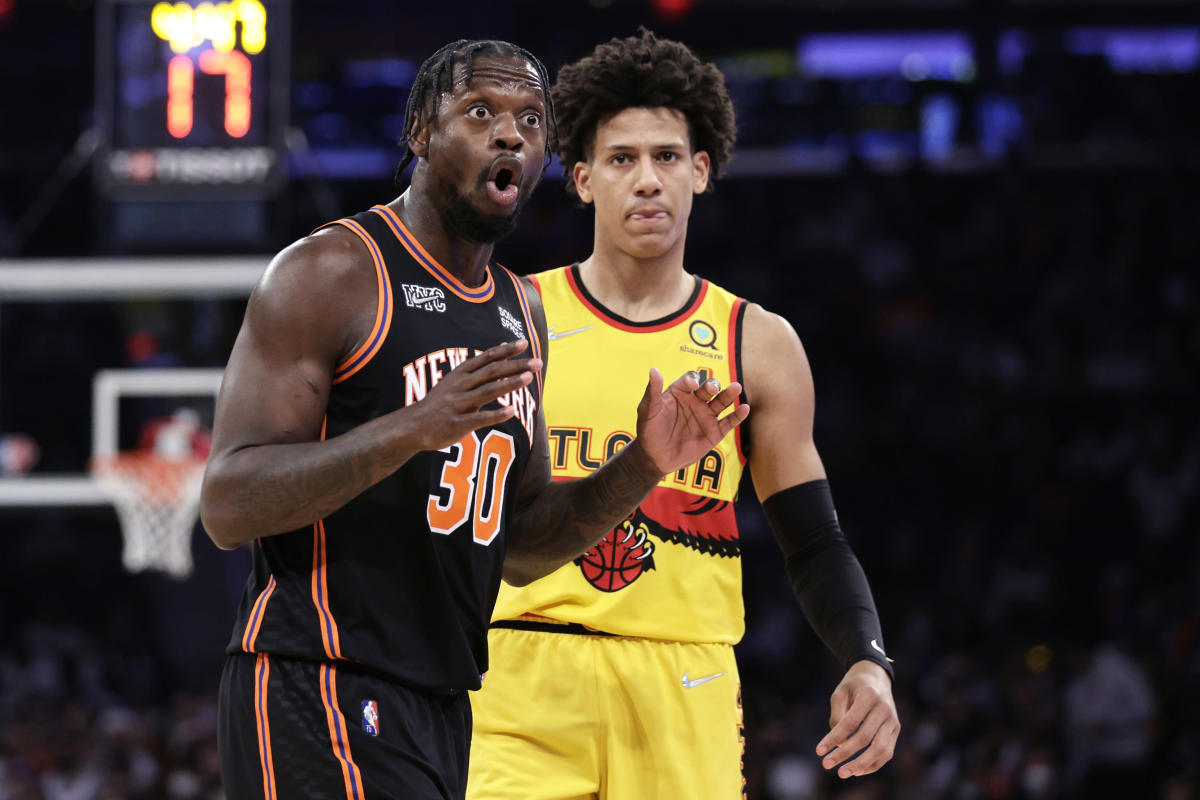 NEW YORK (AP) Kemba Walker became the seventh NBA player with a triple-double on Christmas, and the New York Knicks beat the depleted Atlanta Hawks 101-87 on Saturday for their first win on the holiday in a decade.

Julius Randle had 25 points and 12 rebounds for the Knicks in a matchup of teams that met in the first round of last season’s playoffs. But the Hawks were missing Trae Young among nine players in the NBA’s health and safety protocols, so it wasn’t much of a rematch of Atlanta’s five-game victory.

Walker finished with 10 points, 12 assists and 10 rebounds. The 6-foot guard raced around the floor trying desperately for his 10th rebound for much of the second half, finally getting it in the fourth quarter when Mitchell Robinson’s block came to him.

It was the first triple-double on Christmas since Golden State’s Draymond Green in 2017, continuing Walker’s strong stretch since going from out of the rotation to back in the starting lineup when the Knicks were short-handed.

Fans in the sold-out crowd chanted »Kemba Walker! Kemba Walker!» for the New York native, who scored 44 points in a loss to Washington on Thursday.

Evan Fournier and Quentin Grimes each scored 15 points for the Knicks, who snapped a six-game Christmas skid. They are 23-31 in their league-high 54 appearances, but hadn’t won one since 2011.

John Collins and Delon Wright each scored 20 points for the Hawks, who were playing on Christmas for the first time since 1989. They had their six-game road winning streak snapped.

Young starred in his first playoff series last spring against New York, ignoring profane taunts by Knicks fans and getting the last word when he bowed to them near the close of Atlanta’s clinching Game 5 victory.

But he couldn’t clear protocols in time for a coveted spot on the Christmas calendar.

»Trae was really excited to have that opportunity to play and unfortunately with the situation won’t be able to do that,» Hawks coach Nate McMillan said before the game. »But we know he’ll be supporting, he’ll be watching.»

The Hawks needed him to be playing.

The Knicks made their first seven shots and raced to a 19-3 lead on Randle’s 3-pointer with 7:48 left in the first quarter. The Hawks outplayed the Knicks for much of the remainder of the half but Fournier hit two 3-pointers during his flurry of 10 straight Knicks points, increasing the lead to 61-51 at the break.

The Knicks blew it open with a 14-4 spurt in the third that extended a six-point lead to 79-63. Consecutive 3-pointers by Grimes and Taj Gibson to open the fourth gave New York its biggest lead at 87-66 and from there the only drama was whether Walker would get one more rebound.

The Hawks’ injury report took three tweets from the team’s official account to list, and besides Young featured key players such as Kevin Huerter, Lou Williams and Danilo Gallinari. Clint Capela returned from protocols and had six points and nine rebounds.

Meanwhile, the Knicks are getting healthier. Grimes made his first appearance since setting a Knicks rookie record with seven 3-pointers and scoring 27 points against Milwaukee on Dec. 12. He was then placed into protocols and missed the last five games.

Knicks: Hall of Famer Bernard King, who set the Christmas record of 60 points playing for the Knicks in 1984, was at the game. … The Knicks are down from six players in protocols to just Nerlens Noel, Miles McBride and Jericho Sims. Immanuel Quickley and Kevin Knox II have been cleared but need to regain their conditioning before playing.

Besides Walker and Green, the other players with Christmas triple-doubles are Russell Westbrook, LeBron James, Oscar Robertson, Billy Cunningham and John Havlicek. Robertson did it four times.

The Hawks fell to 9-12 on Christmas. They are 2-1 against the Knicks, with both victories when they were based in St. Louis. Besides Atlanta and St. Louis, the Hawks also won a Christmas game as the Tri-Cities Blackhawks, but went 0-3 as the Milwaukee Hawks.