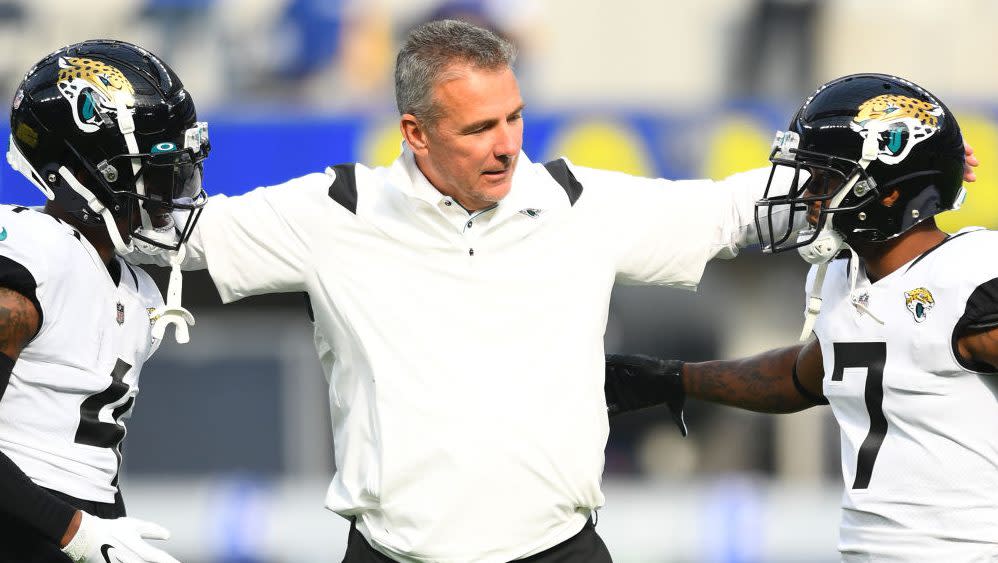 In post-truth America, anything can be spun in any direction that the spinner wants it to go. Former Jaguars coach Urban Meyer has become the latest high-profile figure to craft a self-serving word salad in the aftermath of a bad outcome, placing the blame for failure not on his own behavior but on the reaction to it.

Speaking to Ian Rapoport of NFL Network, the same media outlet that had a significant role in bringing Meyer down, the guy who lasted 13 games in the NFL shared a conversation with Hall of Fame head coach Jimmy Johnson regarding the question of whether Meyer’s “style of coaching can work in the NFL and then in the modern world.”

“I think college has changed quite a bit, too,” Meyer said. “Just society has changed. You think how hard you pushed. . . . I believe there is greatness in everybody and it’s the coach’s job to find that greatness however you do that. Positive encouragement. Pushing them to be greater, making them work harder, identifying flaws and trying to fix [them].

“I think everything is so fragile right now. And that includes coaching staffs. When I got into coaching, coaches weren’t making this kind of money and they didn’t have agents. Everything is so fragile where it used to be team, team, team. I remember talking about it in a staff meeting three days ago. I got into this profession because I had the greatest high school coach and it was all about team. All about the huddle.”

Putting it another way (a more accurate way), everyone else has changed, grown, and evolved while Meyer hasn’t. Dressing down players and assistants, arguing loudly with others, allegedly kicking kickers. Those things don’t work anymore, if they ever even did.

Apparently, they did. Not all that long ago. At Ohio State and at Florida before that, along with every other step on Meyer’s coaching ladder. That’s the most significant unwitting admission embedded in his comments. To the extent that being an over-the-top asshole brought him down, well, he’s always been one.

The difference is that, everywhere else, he won right away. Everywhere else, there was no way for those affected by his words and actions to push back, since Meyer was basically the emperor of whichever college town he occupied. When his hubris led him to the NFL, Meyer landed in a spot where: (1) he lost more games in 76.4 percent of one season than he did in his entire time at Ohio State; and (2) the players and assistant coaches weren’t going to take verbal or alleged physical abuse.

To the extent that Meyer believes he used his words and his foot (allegedly) to coax “greatness” from those around him, his failure to exude greatness made him nothing more than a hypocrite. Questions swirled from training camp regarding his work ethic, or lack thereof. Then, he abandoned his post after a Thursday night game in Ohio, sending the team home to Florida without him while he hung around in Columbus, which is roughly as far from Cincinnati by car as Jacksonville is by jet. It doesn’t matter what he did during a break that he explained as both long planned and spontaneous. What matters is that he didn’t get on the plane with his team and shepherd them home.

Indeed, if he was so concerned about “positive encouragement” and “pushing them to be greater,” he would have used that flight and the days immediately after it to help his players and staff through the inherently fragile hours after blowing a 14-0 lead on national television.

Who’s fragile? The ones who got on the plane and went home (as if they had a choice) or the guy who decided he needed to “get out of Dodge” and “clear his head”? Who’s fragile? The players and assistants who kept busting their asses day after day and week after week in search of elusive wins against more talented opponents or the guy who handled losing a football game the same way a two-year-old processes the realization that he has misplaced his binkie?

He thought he could just show up and flip a switch and be Urban Meyer, and that would turn the 2021 Jaguars into the 1985 Bears. When it didn’t happen, he didn’t get mad at himself for not adapting to his new reality (like Jimmy Johnson successfully did, after going 1-15 in his first year with the Cowboys). Urban Meyer got mad at everyone else for not adapting to him. For not reacting to his mere presence by becoming dramatically better players and coaches than they had ever been.

There’s more in the interview, obviously. Meyer offers a perfunctory apology to Jacksonville. He says he’s “heartbroken” that he wasn’t able to turn the town into a “destination place” with “standing room only” capacity at the local football stadium. He said he’s “devastated” by what happened.

He also denied all accusations made against him in the final days of his baker’s dozen of games at the NFL level. His persistence in his position on those various contentions makes his decision to speak to NFL Network confusing. It was, after all, NFL Network — an entity partially owned by Jaguars owner Shad Khan — that lit the final fuse on Meyer’s firing by reporting that he’d gotten into a heated exchange with receiver Marvin Jones, that Meyer had called his assistant coaches “losers,” and that Meyer had benched running back James Robinson and lied about it. (Actually, Meyer now admits benching Robinson. Meyer claims there was a miscommunication as to when he’d be unbenched.)

Maybe, in reaching his hand into the media fire that burned him, Meyer is simply trying to prove he’s not fragile. Unfortunately for him, it’s way too late for that.