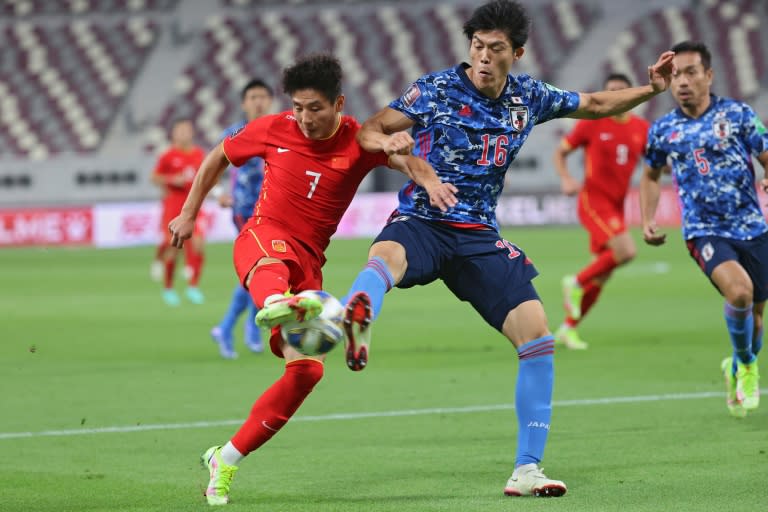 A familiar sense of crisis threatens to envelop Chinese football with the men’s national team heading into crunch 2022 World Cup qualifiers still looking for their first point and first goal.

China under President Xi Jinping have grand plans to become a leading football power, with ambitions to host and even win the World Cup one day.

But the country of 1.4 billion people has reached the World Cup only once, in 2002, and Li Tie’s side were soundly beaten 3-0 by Australia in their opening match of this final round of Asian qualifying for Qatar, then lost 1-0 to old rivals Japan.

Despite boasting Espanyol’s Wu Lei and Brazilian-born Elkeson in attack, the side failed to register an attempt on goal in 180 minutes of football and the pressure is building on former Everton midfielder Li.

That pressure will ratchet up significantly if they do not beat Vietnam on Thursday in the United Arab Emirates, where the match is taking place because of the coronavirus. China then face Saudi Arabia next week.

China and Vietnam occupy the bottom two places of the six-nation Group B table — Vietnam have at least scored one goal.

Only the teams that finish in the top two in Group A and Group B are guaranteed to reach Qatar. Two rounds of matches over the next two weeks will go a long way to deciding who books their tickets for 2022.

China’s talisman Wu came on as a substitute in Espanyol’s 2-1 win over Real Madrid in La Liga and then jetted over to the UAE to join his international team-mates.

«It’s an important win for my club and I hope to bring the momentum to the national team,» the 29-year-old said, according to Xinhua news agency.

Wu’s team-mates have been training in Sharjah for nearly one month and under strict measures to avoid coronavirus infections.

«I know it’s a difficult time for the team since the long closed training period could affect the players’ mentality,» Wu added.

«But all of us have the same goal — which is to win this game, and we are confident that we will achieve it.»

In-form Australia, who top the group with a perfect six points, face Oman and then have an eye-catching clash with Japan in Saitama.

«Yes it’s been a great start, but I expect that to continue.»

Japan, who impressed in reaching the last 16 at the 2018 World Cup, suffered a shock 1-0 defeat to Oman in their opening match of the third qualifying stage and veteran defender Yuto Nagatomo says that «we don’t have any margin for error».

On Thursday they face a Saudi side who have won both matches so far.

«They tend to have more of the possession but that leaves gaps in behind,» said Nagatomo.

In Group A, Iran lead the way with six points, with South Korea second on four.

They meet next week.