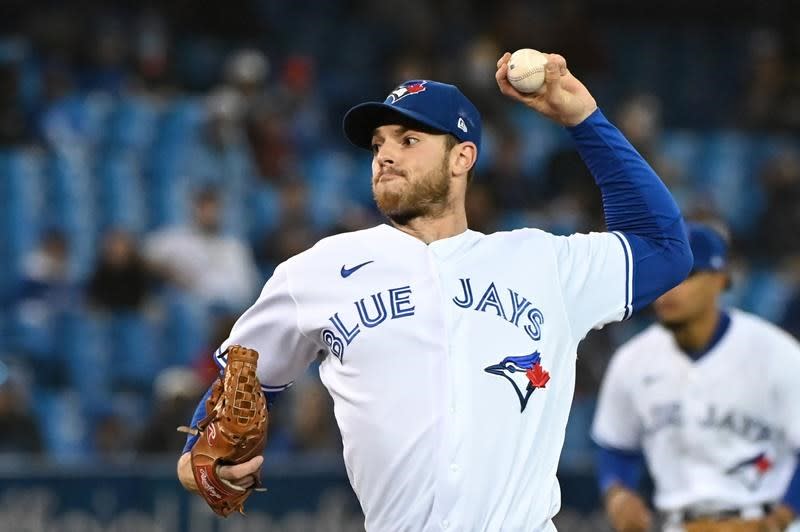 Toronto Blue Jays manager Charlie Montoyo’s surprise move inserting Cavan Biggio at first base Friday was one of the reasons his club kept its playoff hopes alive with two games to play in the regular season.

In his first game for the Blue Jays in two months, Biggio belted out three hits, knocked in a run and also scored in a four-run sixth inning of Toronto’s 6-4 victory over the Baltimore Orioles.

The win kept the Blue Jays (89-71) one game behind Boston Red Sox in the tussle for the American League’s second wild-card slot.

The Red Sox (90-70) doubled the Washington Nationals 4-2. The Seattle Mariners (89-70) began the day tied with the Red Sox, and later played the Los Angeles Angels.

In a summer full of hand, neck and elbow ailments, Biggio left the Blue Jays on Aug. 2 with a back injury and was sent to triple-A Buffalo to get healthy.

Biggio was called up this week and drew into the lineup for Friday’s series-opener on the regular season’s final weekend.

“I don’t want to get emotional or anything, but this was special,” Biggio said.

Montoyo wanted to give Vladimir Guerrero Jr. a day off from fielding his position and used him as a designated hitter Friday.

Lourdes Gurriel Jr. often spelled Guerrero at first base this season, but Gurriel is unavailable with a right-hand injury.

So Biggio was handed the first-base assignment instead. He played well and in the seventh, he lassoed a wild throw from Espinal to tag out Orioles right-fielder Austin Hays.

Jansen and Dicker hit home runs in the third and sixth innings respectively. The Blue Jays lead the Major League Baseball in homers with 253.

Jansen’s 10th of the year was a two-run blast to left field. Jansen’s two-out solo shot starting the four-run rally was his sixth.

A Kelvin Gutierrez lead-off homer ruined his shutout bid, and Matz departed after walking the next batter.

When Montoyo emerged from the dugout to lift his starter, the crowd of 28,855 at Rogers Centre gave Matz a standing ovation.

“It’s what you want to feel at this time of the year, on Oct. first, playing in meaningful games,” Matz said.

He struck out five and yielded six hits in his 88-pitch outing.

With Toronto up 6-1, Adam Cimber was greeted by a two-run homer from Pat Valaika.

Cimber gave way to Romano after hitting Cedric Mullins and giving up a single to AL rookie-of-year candidate Ryan Mountcastle.

Then, after allowing a single to Trey Mancini to score another Baltimore run, Romano loaded the bases with a walk to Pedro Severino. But he managed to get the batter who started the Blue Jays mess, Gutierrez, on a force out.

Romano struck out the visiting side in the final inning, but tossed a season-high 32 pitches for a rare five-out save, which was his 23rd.

This report by The Canadian Press was first published Oct. 1, 2021.