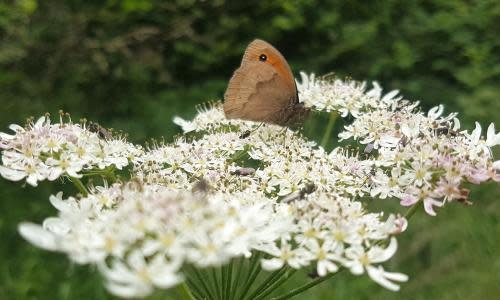 A line of wind-bent hawthorns marks the boundary of this upland field. Pale micro moths fly up from the grass as we walk past newly shorn sheep. From the bright light of this open land, it’s a contrast to enter the green world of Tony’s Patch, a Northumberland Wildlife Trust reserve on the banks of the Honeycrook Burn. By the gate into this ancient semi-natural woodland stands a Scots pine, its solid trunk leaning slightly as if to protect the entrance. We tread quietly into this sheltered space.

Beneath a planked bridge, the burn has all but dried up. Dulled wood sorrel leaves, dusty dog’s mercury and seedpods of bluebells hint at how the footpath looked in spring. Now, there is scented meadowsweet, flowering nettles and hedge woundwort among head-high grasses. A chiffchaff calls, insistent. A buzzard wheels and cries above the canopy and out of sight.

The oldest trees are the oaks, gesticulating with wild limbs, their sprawling branches coated in moss. The twigs of bird cherry are tented by ermine moth caterpillars, eating the leaves inside their protective webs. Ash trees show signs of dieback and, earlier in the year, at the foot of coppiced hazel you could find the chlorophyll-less toothwort, Lathraea squamaria.

A side path leads between ferns to a massive slanting boulder. Fixed to it is a plaque dedicated to the naturalist Tony Clissold, who tragically drowned in a local lake while trying to get closeup photographs of whooper swans. Named in his memory, this wood was given to the trust in 1966 by his brother. Five irregular cup shapes, low down on the boulder’s flank, may be rock art or may have occurred naturally.

Woodruff, herb Paris and sanicle indicate the age of this woodland. Honeysuckle vines scramble up through outgrown coppice. Ferns and mosses colonise decaying branches as we move between light and shade. In a glade, the flat umbels of tall hogweeds are clustered with butterflies. They move restlessly as we pass, ringlets and meadow browns, in the air, on the flowers, above our heads – more butterflies than I’ve seen for a long while.